As is usual, plans of mice and men often go astray. I was hoping to have a bit more done by now, but what with the boss having a bunion operation and demanding endless cups of tea and other stuff and on top of which I tweaked a disc in my back which seriously put a crimp in the proceedings. However, I have managed to add more bits to my terrain for PBI in 28mm.

First up, I have enlarged my cornfield to 30cm x 30cm.

Also, ploughed fields which measure 60cm x 60cm, made of a doormat glued down and lightly dry brushed - dead easy. All the vehicles in shot are 1/48 scale to give some perspective.

Next up a really nice church for the Western theatres from the company Sarisa. 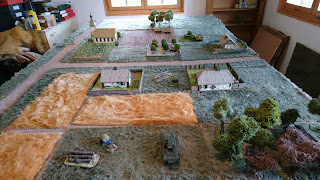 On the gaming front, we have been playing Dracula's America. All good fun, although still wrapping my head around how the game works. But, the Sons of the South and the Colonel have been kicking butt. 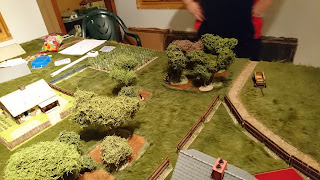 Tomorrow night's game is Dragon Rampant. May the dice gods be with you.